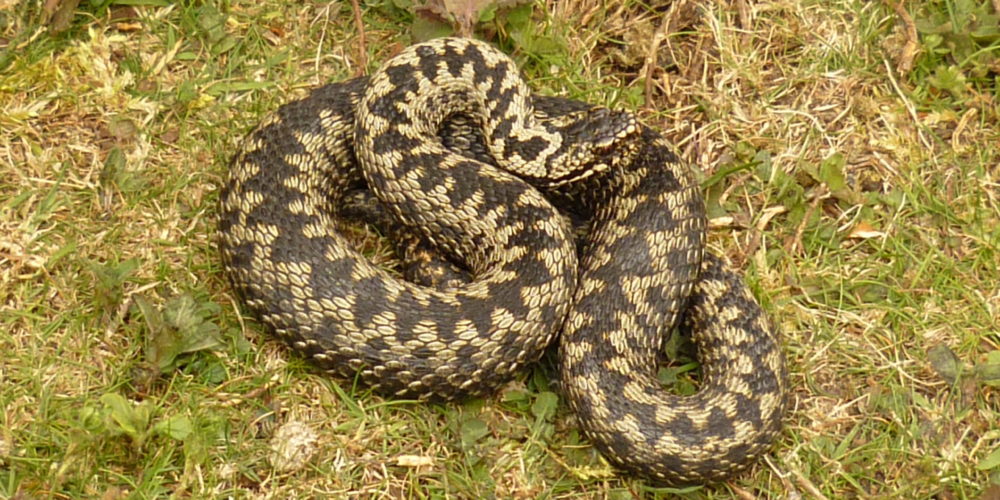 There are six native species of common reptile in the UK; the grass snake, slow-worm, adder, common lizard, smooth snake and sand lizard. All receive strict legal protection. The rarer species (smooth snake and sand lizard) receive additional protection at a European level. Generally reptiles are encountered in grassland, scrubland or on the fringes of woodland and hedgerows. They are also often found in back gardens and on brown field sites meaning that in our experience, reptiles are amongst the most commonly encountered species.

Should initial surveys of a site identify habitats potentially suitable for reptiles, Clarkson and Woods can carry out a detailed habitat appraisal, direct observation of basking sites and refugia surveys using sheets of roofing felt and corrugated tin.  These are checked regularly over approximately a minimum of month, typically during the early morning or later afternoon, when temperatures are between 9 and 18ºC. Any reptiles recorded are identified according to species, sex and age class.  In certain circumstances photographs of individuals may be taken so that they can be identified in future survey visits.  Many species of reptiles have unique markings on their head and back that can be used a little like a fingerprint.

Where habitat suitable for amphibians is present further surveys may be necessary, this is most commonly required for great crested newts.  Surveys are generally necessary for newts for all ponds within a 250m radius of the edge of a development site (and occasionally up to 500m from sites).  A range of techniques are available for survey, all of which require the surveyor to hold a Natural England survey licence.  Most commonly applied is the eDNA survey, a relatively recent survey method whereby water samples are taken from the pond and sent to a laboratory for analysis.  Any great crested newt DNA in the water sample will be identified therefore allowing the presence or absence of newts to be confirmed.

Where presence of newts is confirmed or considered likely more traditional survey techniques including bottle trapping, sweep netting, egg searching and night time torchlight surveys are necessary so as to confirm the likely population size within a pond.  Such surveys are not always essential but are necessary when ponds are likely to be damaged or removed by development.

We can also complete surveys on land for newts by setting out carpet tiles and other refugia which newts will shelter beneath.  These techniques can be helpful in understanding the distribution of newts on a site but are rarely considered sufficiently reliable to rule out the presence of newts on the site.

Where the presence of great crested newts are confirmed licences may be necessary before site clearance and construction works can commence.  We have a huge amount of experience in obtaining licences, often for very complex projects.  One of our principal ecologists, Polly Luscombe, is a specialist within this area and one of only a handful of ecologists in the country who is able to apply for Great Crested Newt Low Impact Class Licences (GLICL).   Once licences have been obtained fencing can be erected around areas of habitat to be lost and a translocation exercise completed.  Such exercises can take between 30 and 90 days to complete and are generally only completed in the spring and autumn.  Good project planning is essential when great crested newts are likely to be present on your site to avoid delays and unnecessary expense.

We can also assist with applications for district licenses which are now becoming widely available.  These provide an alternative to the traditional licensing routes which involve fencing and capture, instead with mitigation measures being focused on off-site habitat creation and enhancement. District licensing can be an easier and potentially less time consuming approach to resolving great crested newt constraints although our experience to date is that the costs of licensing typically are slightly higher than those of traditional licensing techniques.

Licences are however not always necessary, indeed they should only really be considered as a last resort.  We are able to resolve many projects without recourse to licenses, either by completing construction works under a Risk Avoidance Method Statement (RAMS) or avoiding newts by timing site clearance works to periods when they are likely to be absent.

Mitigation for reptiles is in many respects similar to those for great crested newts in so far as it typically involves erection of fencing and the capture and removal of animals.  Licences are rarely necessary unless working with rarer species such as sand lizards and smooth snake, but a reptile translocation site will be necessary that is suitable for reptiles but currently has the space and capacity to receive the translocated population.  Surveys of receptor sites for reptiles are almost always necessary.

For both reptiles and amphibians work is almost always restricted between November and March when these species are typically in hibernation.  Therefore the majority of work for both species takes place in the spring, summer and autumn.  Peak summer months can also be challenging as for amphibians they tend to be difficult to find (as they generally seek damp environments) whilst for reptiles the heat during the summer can make capture of animals very challenging!

We were appointed to conduct baseline great crested newt population surveys to inform a multi-phase residential development site in Wellington, Somerset. Surveys identified presence of a small meta-population of great crested newts centred on 3 ponds. Multi-phased European Protected Species mitigation licences were sought and obtained from Natural England and mitigation designed to maintain the favourable conservation status of great crested newts on site. Licenses have required strategic fencing (using ring fencing, one way fencing, exclusion fencing and temporary fencing) as well as pitfall trapping and use of refugia. Part of the site was developed as a school with time constraints related to fixed completion dates which were required to coincide with the start of term for new pupils to attend. In order to ensure that all deadlines were met we negotiated assessment of the licence under ‘exceptional circumstances’ to speed up the licence review by Natural England as well as use of Natural England’s licensing policies to enable some pipeline works to be completed without the need for a translocation exercise.

Due to the presence of reptiles (grass snakes, common lizards and slow-worms) on site, all works were combined with reptile mats being deployed and checked during the great crested newt translocations.

Mitigation and recommendations were responsive and pragmatic with the final phase being carried out under a non-licensed risk avoidance method statement, rather than licensed approach due to survey findings.

Successful site design and mitigation resulted in the creation of 6 new ponds, retention of all existing ponds and an increase in the population size by more than 200% to a medium meta-population. This has also resulted in a pleasant green space being used and appreciated by the new estate residents.

Clarkson & Woods were appointed by DEFRA to undertake baseline great crested newt eDNA surveys of 490 ponds across Somerset and 357 ponds across Herefordshire & Worcestershire between 2018 and 2019. Data was essential to inform the great crested newt district licence models being rolled out. This required cross party working with Natural England and the GCN eDNA kit suppliers to ensure that all ponds were surveyed, access obtained and kits returned and analysed within a narrow survey and assessment window. All KPI targets were met and necessary data was obtained, with excellent client performance feedback.

In 2010 Clarkson and Woods took over an existing great crested newt licence from a previous consultant at a complex landfill site in Suffolk where a large meta-population of great crested newts is present. This has required extensive, close working with local subcontractors, as well as the client to ensure that operations can continue in line with legal and licensing requirements. To date, all active landfill cells are now clear of newts and ready to take waste, which took several years of extensive trapping and translocation. Clarkson and Woods are currently liaising with Natural England and the client to pursue a new licensed approach at the Site which will enable operations to continue for several more years, whilst providing significantly enhanced aquatic and terrestrial habitat for great crested newts, as well as other wildlife.